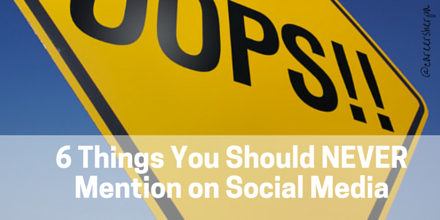 Your personal status updates may be impacting your ability to land your next job. Employers will search for you online at some point during the screening and hiring process. What you think may be hidden behind a curtain of privacy probably isn’t.

93% of recruiters will review a candidate’s social profile before making a hiring decision.

Some may say that employers shouldn’t be allowed to scrutinize private or personal updates on social networks. And some feel that it isn’t fair to evaluate personal lives to determine professional qualifications. We are crossing into new territory where your lifestyle and perceived professionalism are both fair game if you put it out there on social networking sites.  Jobvite’s 2014 Social Recruiting Survey reports that 55% of the recruiters and hiring entities have reconsidered a candidate based on content viewed in a social profile, leading to both positive and negative re-assessments. 61% of those reconsiderations were negative.

Instead of viewing this as invasive, embrace the opportunity to publicly promote the best you have to offer.

Just remember, we don’t all live in Vegas where what’s said there stays there. Be smart and aware about what you are sharing online and know that someone is checking you out. Don’t give them reason to turn away.

Referencing illegal drugs is the most damaging thing you can do to your job search. According to Jobvite’s 2014 Social Recruiting Survey, 83% of recruiters said seeing mentions of illegal drugs in a candidate’s social updates left a negative impression. Stay away from any mention of drugs, even if you’re joking, or run the risk of ruining your reputation.

2. Sex Sells, But Not in Job Search

Next in line for topics to avoid status updates of a sexual nature. 70% said sexual posts were a turn-off. While it may be funny to your friends, that joking status update or tweet is most likely offensive to others and damaging. You wouldn’t dare send that joke, photo or link in an email to your boss, so keep it out of your social networking stream.

You may not think you need to worry about status updates being typo-free, but spelling and grammar do matter. A quick scan of error-ridden updates either shows a lack of attention to detail or poor writing skills. In fact, the recent study found 66% of recruiters said spelling and grammar errors were a negative.

4. Swear At Your Own Peril

Employers have little tolerance for the use of profanity online. 63% of recruiters viewed status updates containing profanity negatively. Profanity is unprofessional, offensive and wouldn’t be tolerated in most workplaces. As old fashioned as this may sound, keep your language clean.

5. Keep Your Guns Under Wrap

People’s attitudes about gun ownership and usage vary widely, and opinions also vary based on whether you live in a rural or urban areas. You should know that 51% of hiring entities, negatively view references to guns, so conceal those weapons.

We all know that drinking and driving don’t mix. The same holds true for sharing photos or status updates about that great party or overindulging Saturday night bash and your job search. These types of updates may not be as harmful as the others mentioned, however, you still want to keep your stream alcohol-free. 44% thought the reference of alcohol was taboo!

On The Bright Side

There is a positive side to all this. Employers can be positively swayed by your status updates. To learn more about what you can do to impress recruiters with your social media updates, read this post: Social Media Can Help Your Job Search: 10 Ways To Show You Are Right For The Job

Hannah Morgan
Hannah Morgan is one of this year’s LinkedIn Top Voice in Job Search and Careers and a nationally recognized author and speaker on job search strategies.  She founded CareerSherpa.net to combine her career expertise with her love of writing, speaking and social media. Her mission is to educate professionals on how to maneuver through today’s job search process.  Hannah is a regular contributor to US News & World Report. She has been quoted by media outlets, including Forbes, USA Today, Money Magazine, Huffington Post, MarketWatch, LifeHacker, The Muse, Business Insider, SmartBrief, Payscale as well as many other publications. She is also author of The Infographic Resume and co-author of Social Networking for Business Success.