There are so many reasons the company may have gone silent after the interview.

Instead of thinking the worse or making assumptions, think about the reasons why the company hasn’t said anything. Being ghosted by the employer is no fun, but it happens. 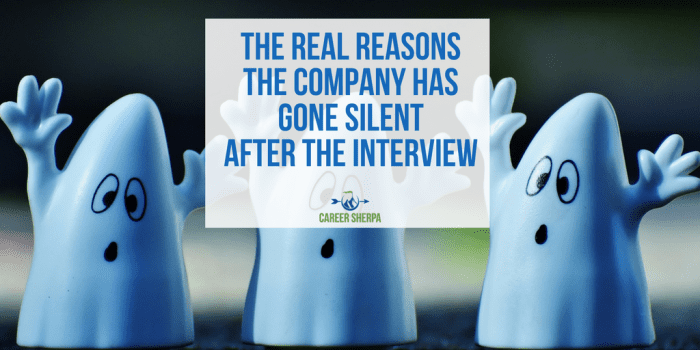 The reason you haven’t heard anything has nothing to do with you! In fact, there are many reasons why the company hasn’t responded to your calls or emails. Vacations, mum’s-the-word policies, restructuring the job, reorganizing the company, lost business, new business, and the list goes on.

Here are four common reasons you’re getting the silent treatment after an interview.

1. The Company Is Looking For The Perfect Candidate

Based on the candidates interviewed or resumes received, In some cases, the hiring manager may decide not to fill the position and hold out for exactly the perfect fit. The company may repost the job to attract a new pool of candidates. During this reassessment period, it isn’t unusual for the company to stop communicating with candidates until a final decision about the job’s scope is determined. This can sometimes take weeks or longer.

2. The Interview Process Is Delayed

Aligning schedules becomes challenging when multiple parties are involved, and it may cause delays in the hiring process. The reason you have not heard anything could be due to hectic schedules, a pressing deadline or emergency within the company or vacations. Acquiring hiring approval almost always requires signatures from more than one person, who may be busy, traveling, sick or on vacation.

3. There Is Change At The Company

Was the company recently bought or sold? Were there changes in leadership? Perhaps budgets were frozen or the new position was put on hold. Changes within the company can and do impact the ability to respond to candidates in the interview process until after the dust settles. Often company executives, legal departments or human resources mandate this silence.

Or, it could even be that the hiring manager decided to switch the focus of the job or the duties assigned. This could result in developing a new set of job duties and job posting.

Any of these changes will slow down or even stifle the company’s communication with candidates.

4. Waiting For A Candidate’s Decision

Sometimes the process slows to a halt while the company waits for an answer from the No. 1 candidate. Based on the candidate’s response, the company may have to reach out to the second-choice candidate or maybe start from scratch.

What Can You Do?

So the company’s gone silent after the interview. What can YOU do? Here are some suggestions for how to take control of the situation and move beyond your emotions.

Whenever you have the chance to speak with a live person, ask when you should follow up next. Be persistent. Checking in every week or two isn’t necessarily being a pest, especially if you really want the job.

There are so many things you don’t know about going on within the company. Instead of assuming that the company isn’t interested in you, move on and take care of you.

Follow-up is in your court.

The best approach is to take control of what you can. Assume instead, you WON’T hear anything after the interview and plan your course of action.

Read Interview Follow-Up: Do It Better for tips on how and when to follow up without being annoying!

You Can’t Change Them

You may never know the real reason the company went silent after the interview.

And while it may be poor etiquette or rude to not let candidates know where they stand after an interview you can’t change this or them. Why spend time and energy getting mad or frustrated? I know, it is human nature to let emotions get in the way. Maybe some logic will help tame the emotional beast.