Job search often feels like you are entering a new country. It’s like a land of new language and customs, procedures and protocols. 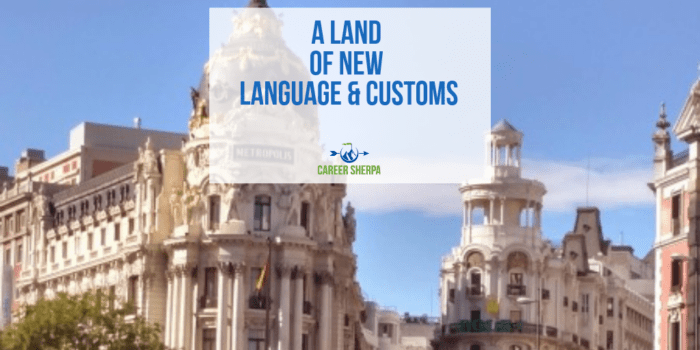 This post is dedicated to the lessons I learned from meeting new people and experiencing new things.  These are my take-aways as they apply to job search and career transition.

As I delivered training and traveled Madrid, my senses were opened to new people, perspectives and ways of living life and working!

Job search often feels like you are visiting a land of new language and customs so that’s the parallel I’ve drawn.

Be Open To Possibilities

I didn’t know much about Madrid and the people I would be delivering training for, but I gleefully accepted the opportunity. Upon meeting the team the first night, I almost instantly felt I was among long-lost friends. Our conversations felt like we were catching up versus just meeting!

Let’s not be so set in our ways or limited in our views that we miss out on things!  Instead of making assumptions based on previous experiences can limit your ability to uncover new opportunities. The world we live in is so small and inter-connected. The chances of finding something in common with a stranger or connections in a new company, country or situation are great!   Instead, listen with an open mind. The theme of the week for me, in every conversation I had, was resiliency– the ability to adapt and adjust to new situations. The women and men I met with were living proof of the most resilient people I’ve ever met. They were Americans living in foreign countries; many of them living in more than one country within the past several years. Adjusting, adapting and thriving! They are expert navigators of travel, customs, and languages. They smile and have a delightful sense of humor!

There are new customs and language in your job search as well. Rather than feel overwhelmed, angry or frustrated, try accepting the new “land of job search” and learn the culture and language. I wish these men and women could bottle what they have and give us all a dose!

I was excited to see the Museo del Prado and had generally planned out my route. I checked with the hotel desk to get additional information and departed- but without a map. Upon reaching the metro stop, I was overwhelmed by the rush of people but my eyes caught the orange vest of a metro official, so I inquired on the best route. He, unfortunately, did not understand my question and answered in Spanish. Without a map, I couldn’t show him where I wanted to go, so I rushed back to the hotel to get my map and was fortified with the confidence to try the metro again.

Before embarking on an adventure of any kind, make sure you have the necessary materials- visual aids are universally understood!

Re-entering the metro a second time, I ventured over to the flashing lights of the ticket machine. I observed people one machine over hitting buttons and followed their lead. Lo and behold, there was an English flag indicating I could get instructions in my native language! After several attempts, I had my metro ticket, and entered through the turnstiles.

I couldn’t give up. Neither can you. Job search is often filled with new experiences with many unfamiliar processes. It is like a land of new language and customs. But, just give it a try and you’ll get through it!