Millions of people have experienced job loss and the emotional roller-coaster that follows. Here’s what you need to know about how losing your job impacts your emotions.

The loss of a job has emotional effects similar to the death of a family member or friend or a divorce.

The emotions after a loss of any kind are predictable. There isn’t much you can do to avoid them. What you can do is understand what you are feeling and why.

While I’m not a psychiatrist, Elizabeth Kubler-Ross is and she wrote On Death and Dying.  She outlined the 5 stages of grief: 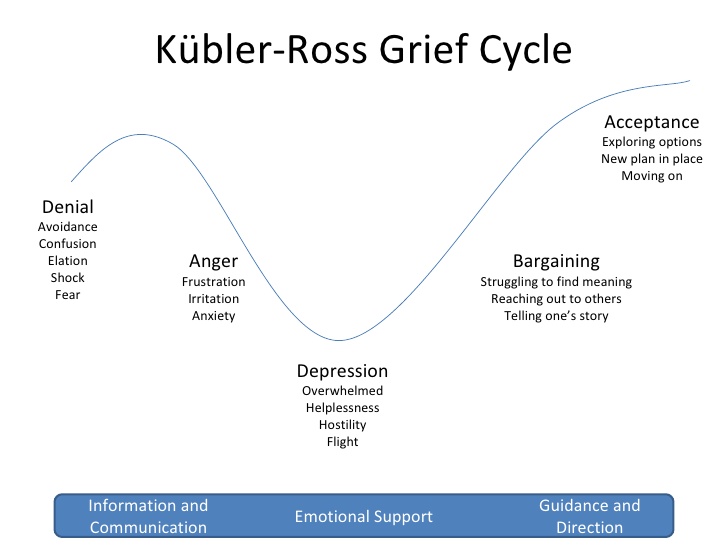 1 – Denial
Denial is a conscious or unconscious refusal to accept facts, information, reality, etc., relating to the situation concerned. It’s a defense mechanism and perfectly natural.

2 – Anger
Anger can manifest in different ways. People dealing with emotional upset can be angry with themselves, and/or with others, especially those close to them.

3 – Bargaining
Traditionally the bargaining stage for people facing death can involve attempting to bargain with whatever God the person believes in. People facing less serious trauma can bargain or seek to negotiate a compromise.

4 – Depression
It’s a sort of acceptance with emotional attachment. It’s natural to feel sadness and regret, fear, uncertainty, etc. It shows that the person has at least begun to accept the reality.

5 – Acceptance
This stage definitely varies according to the person’s situation, although broadly it is an indication that there is some emotional detachment and objectivity.

Your Emotions Are Real

I know your emotions are real because I’ve seen job seekers go through job loss.

When I was in outplacement, I visited company sites and met with people minutes after they had lost their jobs. The intent was to help them. First by listening, second, by letting them know they were in for a rough emotional ride, and third, give them some next steps to take so they would have something to focus on besides their job loss and feelings.

And in my role as a trainer for unemployed job seekers, I see a lot of anger. It walks into the room with the participant, like a two-headed monster. Every word that person speaks carries anger- their tone, their words and their body. It is not pretty, and it is probably going on interviews with them and torturing their family too.

I see situational depression quite often too. When I was coaching one job seeker, I saw his appearance deteriorate over the course of several months. He began his search in khakis and a dress shirt, but weeks later started wearing sweat pants into our meetings. Then he stopped shaving regularly and began to get dark circles under his eyes. It was scary to watch this happen. I advised him, along with others, to seek professional help. He then stopped coming to our meetings altogether. Last I heard, he was still seeking employment.

Getting stuck in one of these emotional places happens quite frequently too.

It is easy to stay angry, or feel sad- it is usually much harder to stop those emotions. However, it is possible and must be done.

So, when you experience prolonged periods of emotion, change what you are doing. It doesn’t really matter what that change is, just do something different. Because the act of taking control, or driving your own bus, can be the boost to self-esteem needed. It can get you out of the rut.

Take the example of a time when your car got stuck in the snow. You don’t just push down harder on the accelerator do you?

OK, yes, at first you do, but when that doesn’t work, you try other things- turn the steering wheel, use reverse, maybe pray. As a last resort, you may have to call for help, AAA or a friend.

In job search, sometimes you need to ask for professional help or enlist the help of a supportive friend-sooner rather than later.

If you’re ready to get unstuck, these articles may help.

6 Ways To Get Your Job Search On Track