As a job seeker, you already know this, I’m sure.  Not all jobs get posted on-line.  In fact, the good ones are filled through referrals and never make the job boards.  So why are they being used to measure the health of the job market by The Conference Board, Inc?

Hot off the press of RBJ which reported Conference Board findings for the month:

This is an interested finding and I am don’t know how to explain the root cause of this lag. (We entered into the recession later than some regions, not all of them.)

Net change  1.34 million fewer jobs posted nationally.  Where did they all go?

I don’t think you can blame all of this on the economy. There may be fewer companies hiring because they are watching expenses after their decline in profits.  It could also be that with so many people out and looking, employers don’t want to be overwhelmed by resumes and applicants. They may, in fact, be hiring.  Perhaps they are using methods the Conference Board hasn’t found a way to track yet- referrals and social network platforms.

Dan Schawbel’s been conducting his own research and predicts the end is near for job boards. Read his full post! He has only 220 respondents so far and will continue the study longer, however, initial findings are: 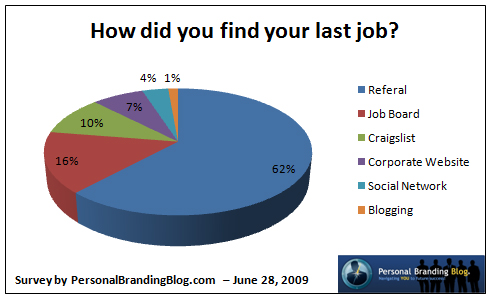 There are some key points here: