I am embarking on a difficult task today. I am going to try to explain why I love Twitter and why I think it is a vital tool for personal and professional branding, building a business and is the best networking tool ever!

I saw a tweet that caught my eye from @KarlaPorter. Since I know and value her, I wanted to see what she was referring to so I checked out @Cream_HR to see what they were doing. They (he) had sent a stream of many tweets to many people saying the same thing. (I would love to show you, but they have deleted the tweets).

I was embarrassed for @Cream_HR but I also felt there was a bit of ignorance or lack of tw-etiquette going on too.

Eventually, the offending @Cream_HR sent an apology and then wrote an article on his website called  “Today’s Epic Failure: Twitter.”  In it he admits he didn’t understand Twitter. He is tech savvy and understands Facebook yet still can’t quite get his hands around Twitter. I know there are a lot of people who don’t get Twitter, so here goes!

The more people I started following on Twitter, the more difficult it became to see what people were saying. There was just too much going on.

I began creating lists and put people I followed into category lists. You can do this now on Facebook too! “Close Friends”, “Family”, etc. allows you to see the updates/feeds from that particular group of people.

I think the reason most people don’t like Twitter is because the home feed is chaotic. Use Tweetdeck or HootSuite. They are free at the basic level.

In the early days, it was just Twitter.  Then came Tweetdeck.  A tool to manage your tweeting experience.  There is also HootSuite – HootSuite is a social media scheduling and monitoring platform. From either platform, I can monitor, engage and schedule status updates for the future. Plus the updates don’t move as quickly so I can see who is saying what.

Using Lists to Organize What You See

Why use tools like Hootsuite?  There is so much going on, it is sometimes difficult to catch important updates.  By organizing the Twitter accounts I follow into “lists,” I can sort by types of followers.  Lists are sort of like tags.  Here is what my Hootsuite dashboard looks like. I can also add feeds from LinkedIn and Facebook.

Each column is a list of people I follow based on subject matter. As a job seeker, you may choose industry news, target employers, network contacts, city. All you need to do is follow Twitter accounts and add them to a list you create. (Learn more about how to create Twitter lists here). Here is where things get really cool.  I can add my LinkedIn home feed (status updates from my LinkedIn network) to Hootsuite and/or TweetDeck  Now, instead of having to log in to LinkedIn, I can see what my network is doing from Hootsuite or Tweetdeck.  I still do log into Facebook and LinkedIn, but not as often. 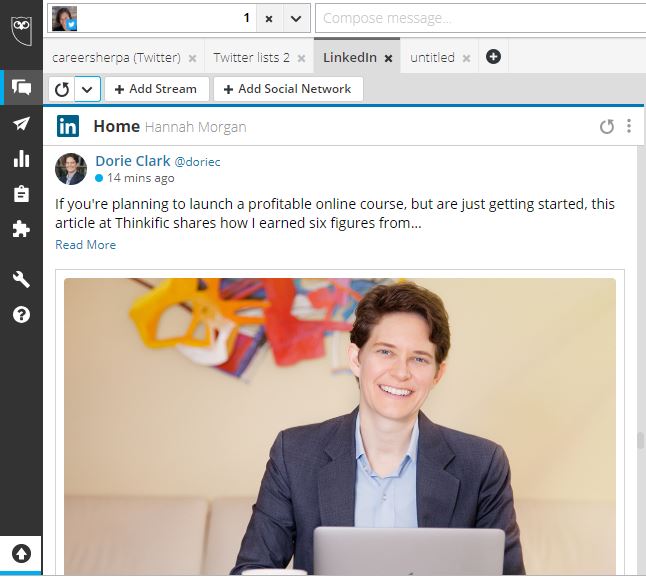 Tweets are public which is both a good thing and a bad thing. But this isn’t unlike Facebook or LinkedIn or any other social networking site. Always be cognizant of what you post!

The reason I have always loved Twitter is that I can share (like) anyone’s tweets, whether I know them or not. Imagine being able to “like” the status of an Olympic athlete after they win a medal? It shows your support of what they’ve accomplished. It is like sending a “Congratulations” card! And who knows, they may send you a thank you note (tweet!)

Information Sharing Not Self Promoting or Spam

When you update your status on Facebook or LinkedIn, who really cares, right? Especially if you are talking about what you had for breakfast. But look deeper. When you update your status, you could be educating people on healthy eating habits or routines that convey lifestyle preferences.  Generally, though, I find people are sharing information they are proud about or want others to know about. That’s what’s happening on Twitter too.  A great resource is the Twitter Chat Schedule! It lists hundreds of different Twitter chats on different topics! Find one and learn from others!

Facebook and LinkedIn are more than just Rolodex of contacts (or they should be). You have discussions with people you know based on their status updates. You hit the “like” button on a Facebook or LinkedIn update why? Because you want them to know you read it, you care, you agree, whatever. It is a way of letting them know they’ve been heard. Sometimes you’ll even add a comment to an update you like.

Same thing with Twitter. When you read a status update from someone (a tweet), instead of “liking” it, you retweet it. If you want to add a comment to add your thoughts, then you can do that too in the tweet. It becomes your way of supporting someone else.

Creating a Community, Group, or Tribe

When you segment the people you are friends with or connected with on Facebook or LinkedIn, you realize you share interests. Those interests allow you to create a collection, group, community or tribe of like-minded individuals. You are segmenting conversations and interactions based on shared interests.

You have certain “go to” people you would seek answers from. Twitter is no different; except for the fact that you may not have ever met those “go to” people before or they may not know you.

But a funny thing happens on Twitter, just as it does in a tight-knit community. People help strangers. They provide answers, suggestions and offer a hand if they can. But you’ll have to trust me on this until you begin building your own community of “go to” tweeps. Here’s some guidance on how you can find smart people to follow on Twitter.

When you begin building a network of people in real life, it takes time to establish mutual trust. The same holds true on Twitter. If you are expecting miracles out of the gate, it isn’t going to happen. Be slow, purposeful and sincere in your communication with others on Twitter. Give to get. Help others selflessly and regularly. See what starts to happen. Here are some reasons other people love Twitter!